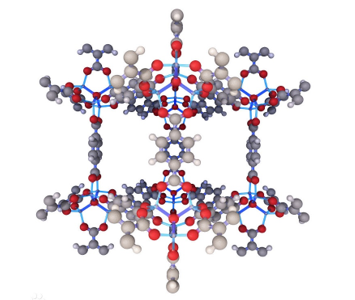 New research by the National Institute of Standards and Technology (NIST) shows that 3D printed plastics can be used to make low-cost sensors and fuel cells when combined with a versatile material for detecting and storing gases .

This versatile material is a metal organic framework compound ( MOF); these materials are simple to manufacture and low in cost, and some of these materials can also be used to capture a specific gas from the air . From a microscopic point of view, these metal-organic frames look like buildings under construction â€“ the spatial structure of the steel beam structure you imagined. A special feature of MOF is that it allows fluid to flow in its space, while its beams absorb specific parts of the liquid and capture these specific parts as the remaining liquid flows past. This material is a very promising candidate for refining and refining other hydrocarbons.

Metal-organic framework compounds have attracted the attention of scientists from NIST and American universities because this material can also lay the foundation for cost-effective sensing technology . For example, some MOFs can be used to filter greenhouse gases such as methane or carbon dioxide. The problem, however, is that the newly manufactured MOFs are tiny particles of similar size to dust. And it's very difficult to make a useful sensor with these materials that can even slip away from the fingers.

To solve this problem, the team decided to try to mix the MOFs with the plastic used in the 3D printer. Synthetic plastic materials can not only be shaped into the shape that the team wants, but also have sufficient permeability to allow gas to pass through it, that is, MOFs can detect specific gas molecules that the team wants to detect. But after mixing, will MOFs still work?

In a paper on advanced technology polymers, the researchers said that this idea can be used not only for sensors, but also for other purposes. They proved that MOFs and plastics can be well combined ; for example, when this mixture melts, MOFs not only do not precipitate to the bottom of the plastic, but are evenly distributed throughout the mixture.

The paper also shows that when the solid mixture and plastic are simultaneously exposed to hydrogen, it is more than 50 times more hydrogen than the plastic itself, indicating that the MOFs can function effectively even when mixed with plastic. These are all gratifying results, but still can not meet the requirements of fuel cells.

Ahmed said his team members are optimistic that this idea can be improved and become a reality. They have conducted a preliminary study in the second forthcoming paper, which explores the effects of two other MOFs in absorbing nitrogen and hydrogen, and also shows how to reduce the degradation of humidity on such MOFs and plastics. The effect of the mixture. Currently, the team is looking for opportunities to work with other NIST research groups to jointly develop MOF-based sensors.

Zeeshan Ahmed, a scientist from NIST, said: "Our goal is to find a storage method that can store 4.5% of hydrogen, and now our storage is less than 1%. But from a material point of view, we don't need to Significant improvements have been made to achieve this goal. So we can see that glass or plastic is already half full."

Hydrophilic aluminium foil is the main raw material of heat exchanger of household air conditioner, which has a great influence on the efficiency of air conditioner. If the raw material of the heat exchanger is hydrophilic aluminium foil, the refrigeration efficiency can be increased by 5%. It also has the function of anti-corrosion and anti-mildew, no odor, and will not cause the accumulation and blockage of water droplets to affect the heat transfer. The national standard for aluminium sheet and strip (GB/T 3880-2006) is applicable to the unified standard for aluminium alloy sheet and strip materials. Aluminum Foil is defined in GB/T3880-2006 as having a thickness of less than 0.2 mm.