According to Nature, as China's spallation neutron source is put into use, China's new generation of neutron generators are playing a major role in the fields of materials science and other fields, and enhance the nationâ€™s overall strength in related fields. It is reported that the China Space Splintered Neutron Source (CSNS) facility in Dongguan has invested about 2.2 billion yuan to enable more and more top physicists, material scientists and international partners in China to participate in various physical and engineering experiments. Its designers also hope that the facility will play an important role in manufacturing batteries, bridges, aircraft engines, and even cancer treatments. 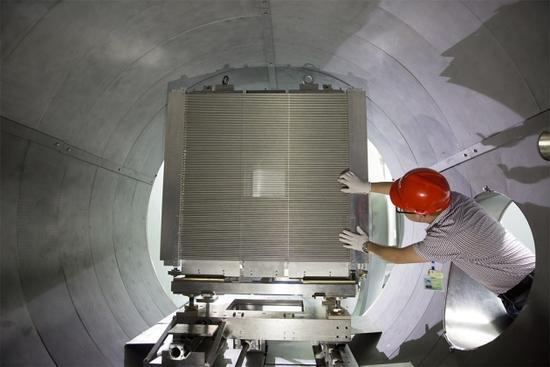 Graphic: Engineers are working on an instrument for the Chinese Spallation Neutron Source (CSNS)

Professor Wang Xuli, a physicist at City University of Hong Kong, said: "This is not only a major advance in Chinese science, but also a major event in the international scientific community."

The spallation neutron source generates neutrons by the collision of protons with metal targets, and CSNS uses tungsten as the metal target. Compared with the method of using a nuclear reactor to produce neutron beams, this method is more economical and safer. Since neutrons have no charge, they can penetrate the material more easily, and the addition of neutrons is more sensitive to elements such as hydrogen, and thus can be used to detect fuel cell manufacturing materials. Similar facilities are only available in the United Kingdom, the United States, Japan and Switzerland, and Swedenâ€™s related facilities are under construction.

Fujio Maekawa, a neutron source expert at the Japan Proton Accelerator Research Center in Tokai-mura, Japan, said that although the spallation neutron source in China generates a lower neutron density than other spallation sources, it means that the experiment takes longer. But given the scarcity of neutron generators, â€œusers all over the world will welcome new sources of neutrons,â€ he said.

China's spallation neutron source can carry up to 20 beam lines to support as many instruments and equipment as possible. The preliminary test of the first three instruments started from November 1. Wang Fangwei, head of the China Department of Spallation Neutron Source Neutron Science pointed out: â€œThe neutron sampling is in line with expectations.â€ Although the overall commissioning may take several years, he expects that the equipment will be calibrated and ready for preliminary testing by the end of 2017. .

Chinese physicists are eager to use this facility to analyze the basic magnetic characteristics of materials, and China has a wealth of knowledge in the field of materials science. Wang Xun Li pointed out that these devices are expected to allow Chinese scientists to achieve subversive discoveries in the frontier disciplines, such as the swirling excitation of magnetic materials and high-temperature superconductors. He said: "There are a large number of leading scientists eager to use this facility to study the magnetic properties of materials."

Wang Xuli believes that the spallation of neutron sources in China will encourage Chinese researchers to stay in the country instead of seeking career development elsewhere. He said: "In the past, it was very common for Chinese scientists to go abroad to conduct such research."

The first equipment of the facility also attracted international researchers. German material scientist Frank Klose said that the source of spalling neutrons in China is the main factor for him and his wife, material scientist Christine Rehm, to join the Guangdong Institute of Technology in Shantou, Guangdong. Kolos's research focuses on designing data storage devices and sensors that can be used in hydrogen-powered cars. He helped design one of these instruments to study the magnetic properties of spintronic devices that use electronic spins to store data.

However, many scientists expressed concern about the location of China's spallation of neutron sources, saying that Dongguan lacks related services and infrastructure, such as the lack of influential schools and universities. It is precisely these well-developed infrastructures that attract top scientists and His family moved there. A researcher familiar with the facility and unwilling to disclose his name said: â€œI believe that China's spallation neutron source is also plagued by the lack of first-line scientists in Dongguan itself. Many potential users of neutron generators also expressed some concerns, although The facility can accommodate 20 instruments, but only 3 instruments can be commissioned this year."

But more instruments are already under construction. The two instruments funded by the Shenzhen government are expected to be completed by the end of 2019, one of which aims to simulate high-pressure environments such as the Earth's core. The geophysicist Mao Heguang of the Carnegie Institute of Science in Washington, DC, expects to use it to simulate high pressure conditions to test the performance of new materials. Mao Heguang pointed out: "China's spallation of neutron source instruments will be an important asset of the Earth, environment and energy sciences as well as physics, chemistry and materials science. I am very excited about this and the whole neutron community is very excited."