In order to overcome the shortcomings of 3+2 axis machining, five-axis simultaneous machining may be a better choice, not to mention that some five-axis machines also have some features specifically designed for the mold industry. Five-axis simultaneous machining can coordinate three linear axes and two rotary axes to make them move at the same time, solving all the problems of three-axis and 3+2-axis machining. The tool can be very short, no view overlap, and missing machining area. The possibility is smaller and the machining can be carried out continuously without additional import and export (see Figure 3). 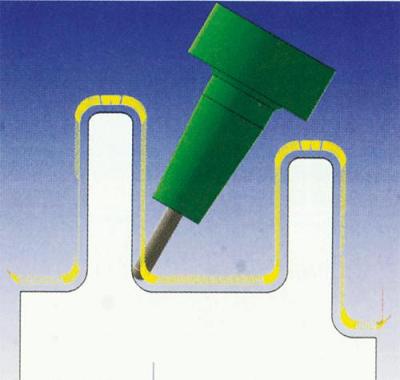 Five-axis milling machines come in many different configurations, such as:

â–¡ The workpiece can be freely rotated with two degrees of freedom by rotating the table, in which case the spindle can only move in the axial direction.

â–¡ The spindle mounting method provides two degrees of freedom to rotate the milling cutter, in which case the workpiece cannot move.

In general, there are several different features to consider when purchasing a three-axis milling machine, such as horsepower, spindle speed, axial feed rate, working range and weight limit. In addition to these, the following aspects must be considered when evaluating a five-axis machine: repeat positioning accuracy, speed, angular limit, milling machine control system selected for 5-axis machining, and other options.

The rotational speed actually means the rotational speed of the tool relative to the workpiece. The faster this value is, the faster the machine will cut. Many older five-axis machines have slower speeds and certainly do not meet the productivity requirements of high-performance machining.

Speed â€‹â€‹is an important factor in machining molds. Many five-axis milling machines have a C-axis that rotates around the Z-axis by default. If a deep-groove workpiece is milled with a short tool, the tool must be tilted around the A/B axis and rotated by the C-axis to cut around the workpiece. In this case, the rotational speed performance of the C-axis is the key to success.

The angular limit is the physical limit of the angle of rotation allowed by the milling machine head, which is based on the design of a particular machine tool. If the milling head needs to be tilted by 50Â° to use the shortest tool or the chamfer, then if the milling head only has a 30Â° rotation limit, then of course the machining task under this clamping condition cannot be completed.

When considering the C axis, the angular limit is very important. The angular movement of the C axis of many five-axis milling machines is not limited, and of course there are many restrictions.

For example, milling may only be able to achieve +360 Â° and -360 Â° rotations. Assuming a tiltable tool is used to machine the upright wall, the tool must move around the workpiece machining path in a circle. In this example, the main motion is produced by the continuous motion of the C axis. If there is a limited C-axis, it will require the machine to complete the machining of the entire workpiece at regular intervals.

The programmer may already be familiar with the three-axis working environment, but for five-axis machining, the programmer must still rethink its working environment. When the workpiece or spindle rotates, will the actual working range become smaller? In order to confirm this problem, the ordinary milling cutter can be clamped on the spindle to measure the working range in the vertical direction of the tool and the working range when the tool is tilted to the maximum value.